So I woke up this morning, looked out the window and saw blue skies. I figured the fires that started last night were not really going any more. We turned on the news, and it turned out I was way wrong. You can read the overview other places, but I will give you my little microcosm of what I saw and experienced today venturing into the smoke.

We know that when there is a big disaster, 9-11, the last big Cedar Fire four years ago, or anything like that, that the office slows way down for a day. So have a basic plan. Go straight into the middle of the disaster, find the people who are working the hardest and are the most beat up, and help them.

So I went to work, did the busy hours between 12 and 1 and moved a few appointments around and took off. As always my staff worked like a cracker jack military team and got what we needed organized, loaded and Miss Roseanna Wheeler and myself were off!

So to understand the day we saw a sign during the day on a bank that said 84 degrees. That is not super hot in San Diego, but how bout for a week before Halloween? 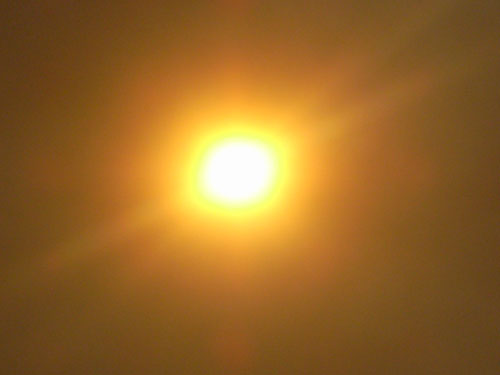 On top of the heat were smoking winds. These are called Santa Ana winds and are caused when there is really high pressure inland, in this case in Salt Lake City, and this literal mound of high pressure air pushes outward to California, and in this case San Diego.

This flag literally got ripped to shreds by the wind. 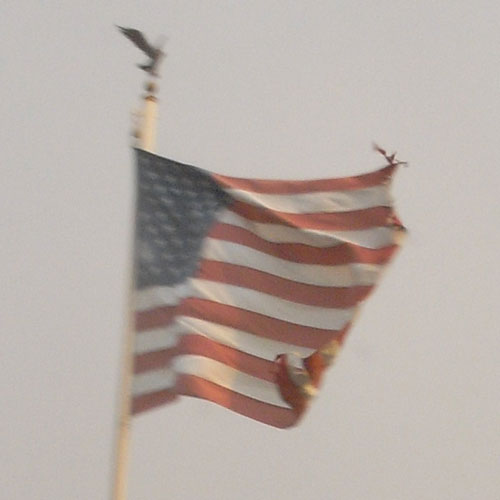 We loaded up on food an Jonathan’s in La Jolla, and ran into Jeff Crutchfield eating lunch there. Jeff is a good buddy and is the pharmacist for the new natural health pharmacy in La Jolla. With some good Orange Water, ham and cheese rolls, and a box of Ritz Crackers we were locked and loaded. Orie had loaded a few cases of water into the car just in case, and we had two chiropractic tables in the back.

The news had been very sketchy about exactly where the fire was, and the Internet didn’t have anything yet. We basically just headed for the smoke! We drove up Pomerodo Rd. into Poway. We first hit a road block where we could not pass, so we turned around. As we were retreating back south, we saw a fire truck reloading with water so we pulled into the station. 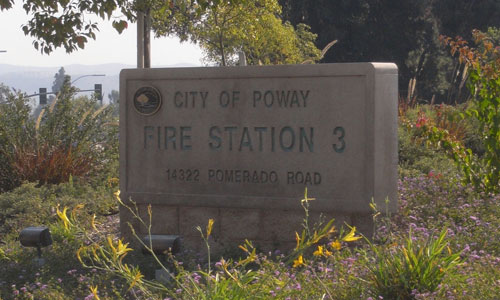 We saw the guys refilling the truck with water. 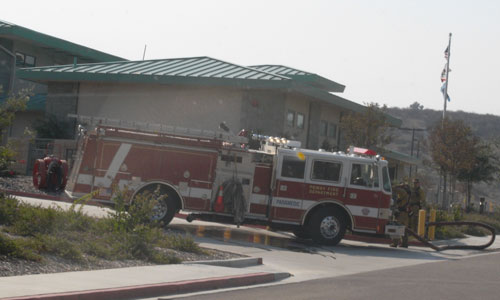 We talked to the guys filling up. They were dirty and tired looking. This is what I remember from the Cedar Creek fire. Tired, dirty guys. Gotta love em, gotta help em! They said they were headed back to the fire and were filling and running and could not stop to get adjusted although they would love to. Very excellent work ethic!

They sent us to the front door, and we knocked and announced who we were.

They let us in with open arms.

I set up the table and asked who was first. We were moving so fast I never got a chance to get too many names. This is our first customer, and I believe his name was Andy. 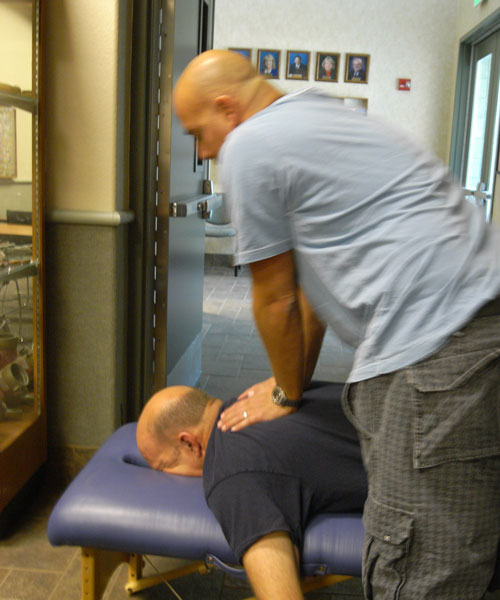 Fire fighters do not take too much convincing to get adjusted. The ones who have done it before know exactly how much better they feel afterwards. A guy who works 36 hours straight without sleep knows how to keep a body running!

Then we got another customer. 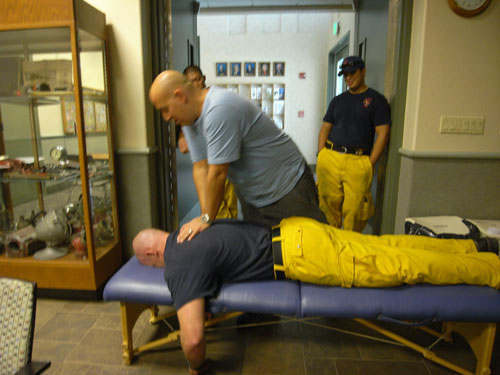 One of the guys watching had never been adjusted and was fascinated. I always find that the brightest, happiest people love chiropractic and just dive into it! Especially the super fit! 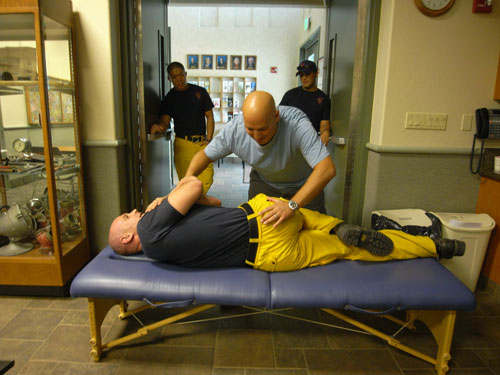 Andy was kind enough to draw us a map to the next station. He told us that although his guys had been working their hearts out, the guys up in Station 2 were right in the thick of it. so off we went, map in hand! 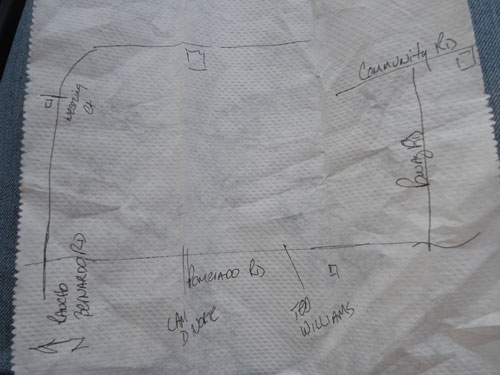 The map by the way is written on a paper towel. 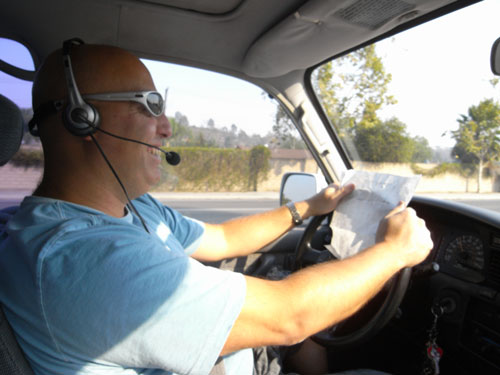 As we followed the map we arrived at the road block we had hit earlier. We explained who we were and that we were headed to Station 2 to give the guys some chiropractic and the police waved us through. 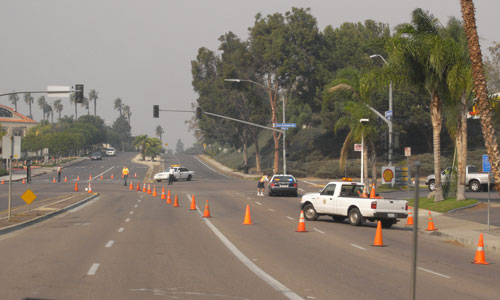 Up to this point the air had been smoky smelling and a little irritating to the lungs, but the sky had looked amazingly clear. As we drove east on Rancho Bernardo Rd. the air certainly got thicker, darker, and a little harder to breathe. 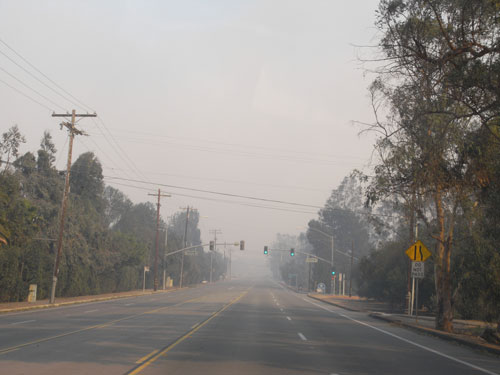 We ran into some more police who were right in the middle of the smoke. I felt for these guys because the fire fighters have equipment to breathe well, but these guys were standing there I guess all day, protecting the possessions of the residents and had nothing but scarfs to protect them from the smoke! 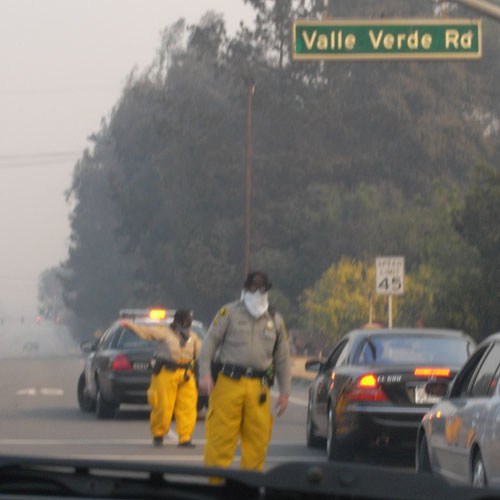 There were fire trucks on the road heading the same direction we were toward the fire! 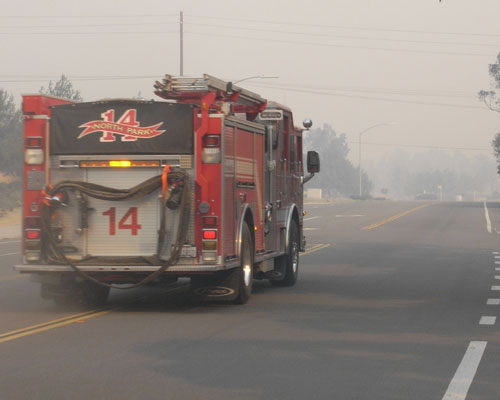 I have no idea if this is a San Diego North Park fire truck, or if it was from outside of San Diego.

As we arrived up the fire station there was a burned area. We never found out if this was from this fire, or if it was a controlled burn done to clear brush from around the station. It was literally right next to the fire station parking lot.

As we pulled up the fire house we say green and red trucks. This means there were out of towner’s here to help. I learned about this on the Cedar Creek fire. When there is a big fire, guys show up from all over the place, as far away as a thousand miles or more. 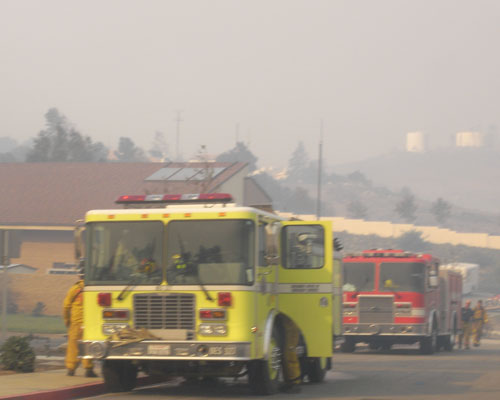 By the time I got in there Roseanna already had guys ready to get adjusted. It turned out that most of these guys were from the Carmel, Monterey area in northern California. 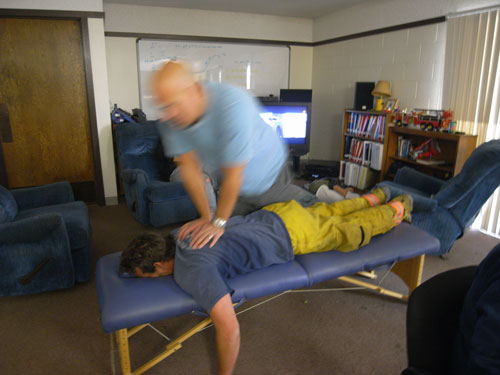 Then there was a younger guy who had never been adjusted before from Carmel. 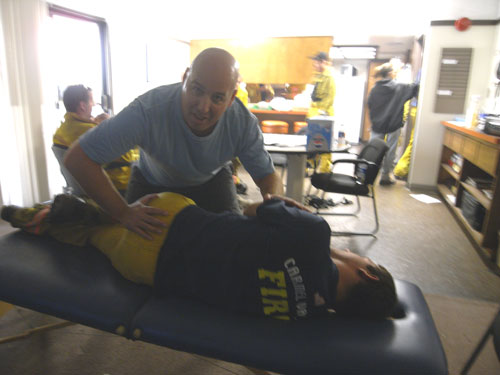 These guys said they had driven down in a fire truck from Carmel and Monterey last night, and had gotten no sleep at all on the long drive. They had arrived and worked all day on the fire and were coming back to the station just completely spent. They had truly earned the grubby, hungry, tired, I need my back cracked status!

I have to guess that while we were in the fire house the fire had gotten a lot closer. As we were about to leave I asked one of the guys how close the fire was. He just looked right into the smoke outside the window and pointed with a bent finger that let me know it was not too far off. He also warned us before we went outside that carbon monoxide levels were getting high and that we should be careful breathing. The fire fighters were very grateful to us for coming all the way out to help and thanked us profusely.

I know that chiropractic is not thought of normally as an emergency service, but as a support to emergency workers I have seen it as a life saver over and over! When I used to work as a life guard if your body was not 100% it made you much less effective. I really think that when there is a big disaster that chiropractors should be mobilized to be just behind the main lines to support the guys on the front lines. 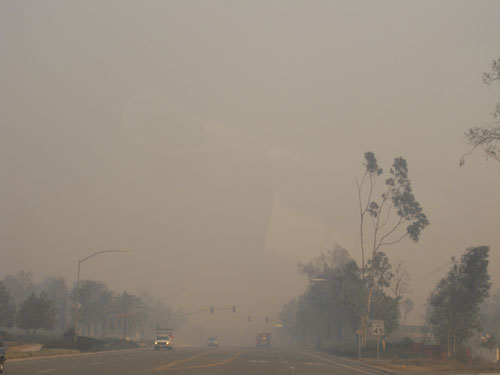 After we passed the checkpoints the air was also was thicker. 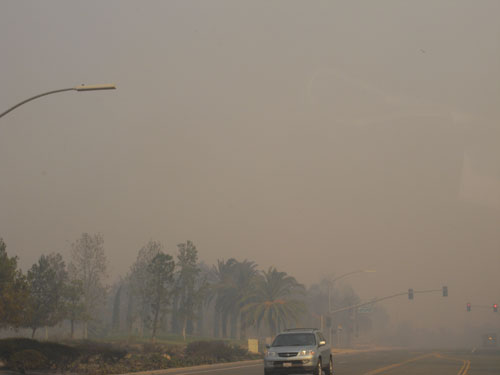 As we retreated, more trucks were headed toward the fire. 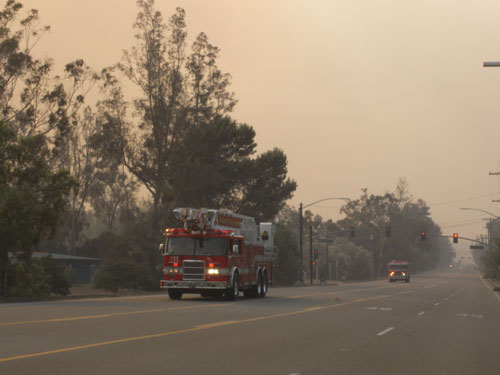 The road back was wide open and we thought we would be back in no time. 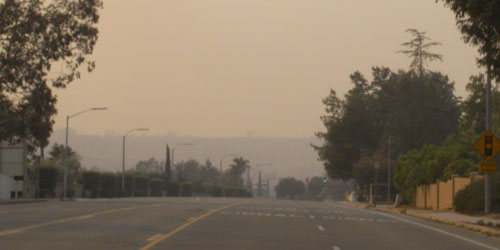 Roseanna took this eerie image on the edges of the smoke as the sun forced its way through the smoke. 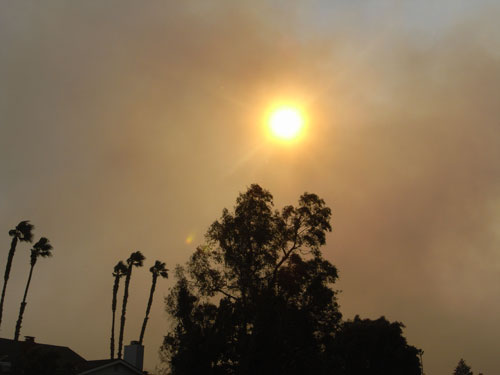 We then went to Station 1 but all of the fire fighters were out on the front lines. We were directed over to the Poway City Council room where the Poway command center was set up. We were directed to Garry Mac Pherson who is one of the Division Chiefs of the Poway Fire Department. When I worked on the Cedar Creed fire fighters I ended up working on about 20 division chiefs and higher ups from fire houses all over the Western U.S. These guys are some of the finest most competent people I have ever met.

Mr. Mac Pherson was right up there with them. He had gone 36 hours without sleep, and he was as cordial and welcoming as if he had invited us for tea. He thanked us for what we did. We told him we would probably be back tomorrow to do the same. A great competent individual who was doing a fine job helping to coordinate the entire effort. I also was very impressed with how organized and set up the command center was 36 hours after the fires started. You could tell the group was very competent and trained well. They were right in the midst of a major, major disaster and they looked sharp and crisp and on top of their game!

Looking at our time, we realized we had to get back to the office for the nighttime rush of patients. But first it was time for our reward for our days work. The thanks and smiles were really the reward, but this was fun too. 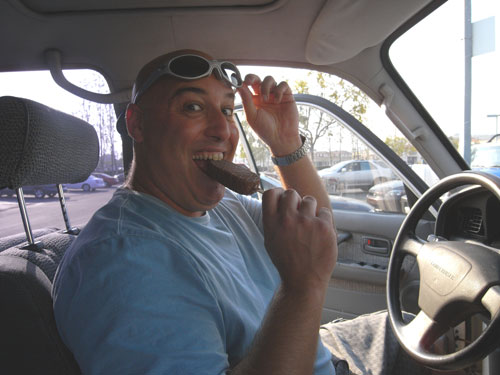 There were 3 bars in the box we got. Can you guess who ate one bar and who ate two? 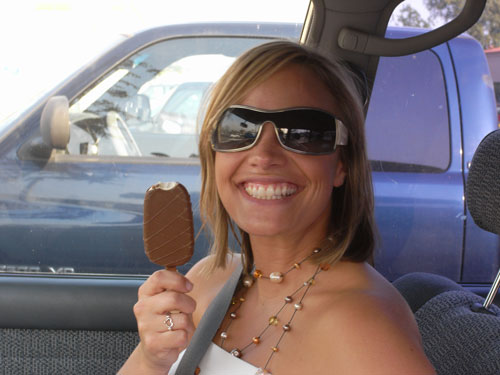 We then started driving back to the office. Little did we realize it, but a there were a whole bunch of evacuees down the road ahead of us. 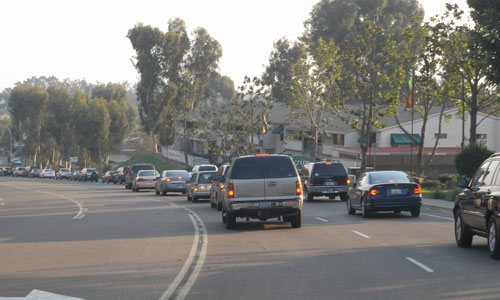 We called Cheng Cheng and Orie at Seaside and told them our predicament. 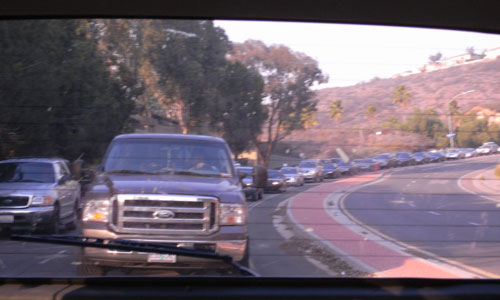 They quickly brought up Google Maps and re-routed us through a few side roads. We then hit the 15 and were off and flying home. I predict without Google maps, Cheng Cheng, and Orie we never would have made it back to the office in time, and would have spent another hour or more in the traffic as it was barely moving.

Tomorrow we are getting up early, which I never ever do! and going back for more adventure! I really appreciate the guys on the fire because as I am about to go to sleep in my nice air conditioned home with my pretty wife, I know there are guys on the fire right now, risking their lives and pushing themselves to the edge to save the property of San Diego’s residents. I also know their bodies will be beat up, so we will be back tomorrow to help wherever we find we are needed most!

click here to read about the Witch fire Day 2Â